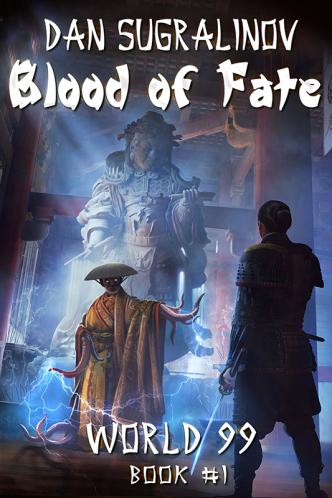 The body of young paralyzed Luca, a boy killed by cruel bullies, becomes home to an interdimensional traveler. This is the ninety ninth world for this traveler who has spent an entire life in each of his previous worlds. And now he is out of lives, his previous misdeeds leaving him with a negative balance of points and preventing him from reincarnating anew. Once he realizes that he must spend his final life in a poverty-stricken family in a backward world, he awakens the consciousness of the deceased Luca and ends his own physical existence, leaving all his abilities to his heir.

We're uploading a huge part of the book to RoyalRoadL.com. Check it out here.

It’s an entertaining story, I’m just not sure it’s Wuxia, but that’s also not a genre I read regularly. As far as being LitRPG, it is. If light LitRPG. There is the inter-dimensional interface which shows earned karma points, called Tsoui, which are used to spin the wheel of fate and possibly get special powers or detriments. Those powers increase in levels as the MC uses them. Thus there is a progression system. However, there are also long stretches of the story where these powers aren’t mentioned and the MC doesn’t consciously do anything to improve, it's more automatic or situational. Overall, I liked the story as I do all the author’s writings. The story is a bit darker than his other works, but it’s still fun to see the MC come through to overcome his challenges and all the unforeseen consequences. Score: 7.3 out of 10

The story arc is on the predictable side for stories like this. The MC starts of in a terrible position, dies, is brought back and then, in a stroke of luck, ends up with an ability which makes them OP when compared to their peers. The MC then goes from rags to riches, and weak to powerful, over the course of the story. The LitRPG is extremely light, basically the MC's main ability goes from level 1, to level 5, and that is the extent of it. There is clearly laid ground work for the MC to get additional powers and abilities so this aspect may become more important in future books. I ready this on KU and it was easily worth the time invested for a interesting story and a new take on world building.

I thoroughly enjoyed this book. I was impressed with the variety of this story. It has a ring to it that you may notice in Sugralinov's other books. But not a slightly different repeat like many authors of the genre. I can't wait to see where the story takes us!!!

I loved the book it was a fresh take on the Wuxi reincarnation novels we see popping up everywhere and is one of the few you can actually pick up and have your expectations and the reality of the book meet. Keep up the good work

The author lays out an existence of unlimited possibilities and then defines a strange clever world with a traveler who can access fate's wheel. The choice of possibilities made by the author are intriguing; great job!