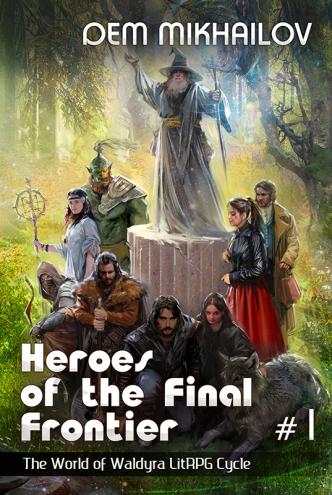 This is a sequel to Dem Mikhailov’s cult LitRPG saga Clan Dominance: The Sleepless Ones!

Life is an immense colored mosaic of stories and biographies. This is true for the virtual world of Waldyra as well—it’s enormous, boundless, and full of colors. The end of one story is also the beginning of another. The story of the Great Navigator and the Great Oceanic Expedition might have been a long one, but it was simply a very short epoch of the Great Navigator to the world of Waldyra. And this epoch already ran its course.

However, the story of Rosgard was only beginning, and life has many challenges, adventures, clan quests, and mysteries in stock for him—as well as family trouble and a plethora of momentous events that begin randomly and end unpredictably.

This story is for those interested in what happens to Rosgard after the Great Expedition and what other adventures he’ll have and secrets he’ll learn. Even though he remains a famous player, his legendary status is no more, and he is no longer under the auspices of the incredibly influential clan of the Sleepless Ones.

What will Rosgard get involved in now?

He obviously needs to ponder founding a clan, choosing the region of Waldyra that he favors the most as his home base. The problem, though, is that soon after the exodus of most old school heavyweight players to Zar’Graad the PKs and the fledgling Old Continent clans transformed the Lake District, which remained unattended, into a gloomy and dangerous place. Therefore, one would first of all have to put things in order with an iron hand so that life could finally get back to normal.

Attention! It is recommended to familiarize oneself with the Clan Dominance: the Sleepless Ones series before embarking on this journey!

The book is released in collaboration with our partner - 1С-Publishing

Great book again. Not really a con, but would have liked more focus on the new world and not having nost of the book focused on the old world. Also, mostly focused on Ros alone, I liked having adventure with his crew and daughter the most.

Great trip back to the Ruth’s if Waldyra, and going back to the roots of what made the original series such a delightful read. Fun, lots of action, not over powered, focused on individual characters.

I am so glad that there is a continuation of the characters from the original series. I really enjoyed the world and perspective of Ros the main character.

Always fun and quirky! Never boring! Looking forward to the next next one! And lets hope he finally decides what he is!

More cool additions to the worldbuilding, some fun adventures, a few cool achievements, but only advances the story a couple of days. Hopefully this won't turn into situation like in another series I am fond of where each book is like 400 pages of slice of life that moves the narrative forward a day or two. And at that rate the story ARC could take 100 books...