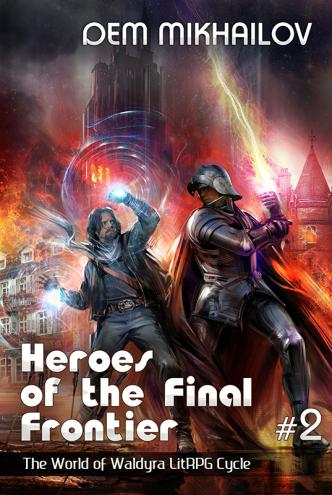 Book 2 of the sequel to Dem Mikhailov’s cult LitRPG saga Clan Dominance: The Sleepless Ones!

Old nemeses often turn up when you least expect them—and, more often than not, just when you're at your most vulnerable. Rosgard is no exception. He may have become the leader of a new clan, but he's lost support of the Sleepless Ones, the undisputed heavyweight champions of Waldyra, and right about this time he ran into someone who's been his sworn enemy since their days in the game's Crèche.

Heroes of the Final Frontier have had war declared on them. This is bound to be a real stress test for Rosgard's entire crew. He's faced with the necessity to prove that he isn't merely a lucky guy who'd had a unique spell handed to him on a platter to make him a legend, but a serious leader in his own right, capable of holding his own even if starting from scratch is what it takes. The war was declared at an inopportune moment, since Rosgard has plenty of problems to solve right now, from recruiting for the clan to making sure enough attention is given to the upbringing of his daughter, destined to become one of Waldyra's goddesses someday. But it is in the very nature of wars to catch you unawares.