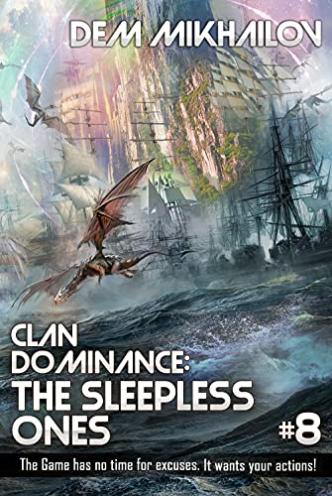 As Julius Caesar said as he crossed the Rubicon, "alea iacta est"—"the die is cast." All the bridges have been burned. The contract with the clan of the Sleepless Ones has been signed, and Rosgard will begin the expedition under their banners. The Black Queen is in the lead—an enormous ship masked as an island sets forth to bring the fleets to a new continent concealed under a magical veil that can only be parted by a single player—namely, Rosgard.

The dominance of the Sleepless Ones may have a flip side to it. Other clans have had to put up with their superiority for a long enough time—this might be the perfect moment to drive a dagger in the back of the uppity Black Baroness. This is a good time for the balance of power to shift drastically—on the old continent and throughout Waldyra. The journey to Zar'Graad won't be easy. Rosgard and his team will be in the very thick of naval warfare with no quarter given. And this is just the beginning of a long journey. What might lie ahead?

The final part of the legendary series of books is getting ever closer—please welcome another installment of Rosgard's saga in English!

I have really enjoyed the series. This particular book had a little more at sea than I would’ve liked, but I guess it is a great sea expedition.

Very much enjoyed it. Kept me in the edge of my seat the entire time for whats gonna happen next. Wish they would have went more into the silver legend and the underworld , but who knows