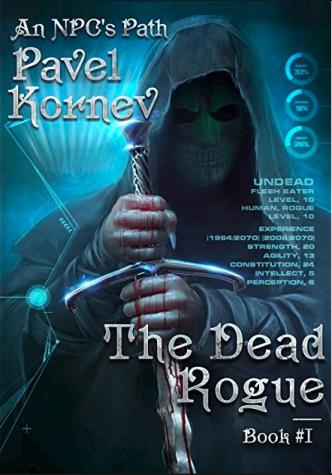 Virtual worlds are places of boundless freedom. Anyone can become an elven mage or an invisible rogue, join a clan and go on raids, fight, develop their characters and most importantly, escape from the daily grind.

However, a game is only a game if you can quit. This is something I learned the hard way. I just wanted to let off some steam in virtual reality and ended up getting murdered and imprisoned in the body of one of the undead—slow, clumsy and cursed to die at the hand of other players over and over again.

The only way out of this awful predicament was to find the legendary Scroll of Rebirth, but the helpless plague-ridden corpse would need to be turned into a real killing machine. If only people knew what it was like to level up a dead rogue...

Very well written and so entertaining! I really enjoyed the main character and appreciate that he has a believable conscience. The litrpg contents are amazing! Write longer stories! Read this!

The action is good, game mechanic stuff is detailed, it was interesting to see how the MC built his character, and there are several good story arcs. The antagonist in the story is a decent foil. I particularly like the late storyline companion that adds a balancing weakness and vulnerability to the character. It has the potential to develop into a touching relationship. But again, most of the story is action, adventure, and questing.

For a stuck in the game book, this one starts slow and ramps up as the story progresses. Running at a decent clip by the end of book 1. I enjoyed it. It had an interesting respawn mechanic that adds to the story. Nice to finish a book that leaves me wanting more. Pretty readable translation. What can I say, I like the Russian flavor to the translated books.

I enjoyed this book immensely. Unlike most LITRPG and WUXIA books, this one manages to avoid the common pitfall of having an extremely overpowered main character. The main character is interesting and well written, his struggles are reasonable and captivating. You do not get the sende that John will prevail against all odds. I am eagerly waiting for the next installment in the series.

I really enjoyed this book. There are some grammar and spelling issues but nothing you cant understand as you read. The game world feels very much like a real MMORPG with mechanics that are believable and world events that help the story.

The main character is put in a nearly impossible situation and is able to make it work with a fair amount of effort.