Dungeons of the Crooked Mountains 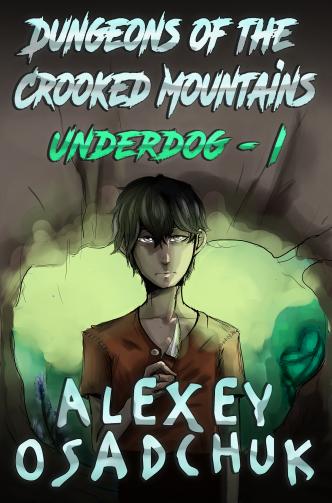 Eric was born in a world governed by the Great System, in the family of Aren Bergman, a respected miner from Orchus. But the joy of gaining a son was overshadowed by the newborn’s terrible affliction. Eric was completely nulled – level zero and no characteristics points. The only things keeping him from dying were his tiny base supplies of “life” and “energy.”

The medicine woman who delivered Eric believes this to be the work of the evil spirit Bug. Due to the peculiar laws of the Great System, Eric cannot use experience essences or characteristics tablets, so he risks having to spend his whole life confined to a bed. But his father finds a solution. He takes out a large bank loan and goes to the capital where he buys a few artifacts of the Ancients on the black market, which have no level restriction.

Despite having the artifacts, Eric is still very feeble and everyone in town thinks him a freak. But at least he can move on his own and that gives the Bergmans hope. But alas, it isn’t for long. On Eric’s fourteenth birthday, his father and mother die in a mining accident. The bank takes their house, and Eric is left with no choice but to work off the remaining debt in the Dungeons of the Crooked Mountains.

Great world, solid character development. Author catches the callous, cold, and self centered nature of society built on other than western values, corruption is endemic, with every outstretched hand a possible threat. within this endemic evil the main character is someone no one could account as a threat, he is a well hidden threat, with his drive being is only advantage, and a small gift for magic his only advantage.

You basically have a guy at the bottom of society who discovers a quirk with his body that gives him a chance at life. I liked how the story didn’t immediately devolve into a wish-fulfillment story and continued to present the protagonist with challenges. Cannot wait for the sequel!

I really enjoyed this book. In the Mirror World series, the main character goes to great lengths and sacrifices for his family, particularly his daughter. In the Underdog series, the main character's parents did that for him ... and then they died, leaving him in a brutal world. These the kind of themes I seem to see more often with non-American LitRPG, and the author did it well. The story and characters did not rely on game mechanics to pull you along (I know all about the kind of dark patterns game designers use to keep people playing games longer, and they work for LitRPG stories too), and yet, it is intrinsic to the plot. The story is compelling enough that, I did not mind the awkwardness of the English translation. I am looking forward to reading more.

I know the underdog hero has been done before, but, Mr. Osadchuk does a commendable job here. The mc isn't a bumbling buffoon who blunders into good fortune, nor a hopeless whiner baby, but someone with the determination to endure difficult days and the sound judgment to seize opportunities. Hope this story gets a sequel!

Definitely one of my favorite LitRPG authors. I like the game breaking mechanic. Good story. Striking cover. This was a wonderful read that was hard to put down late into the night.