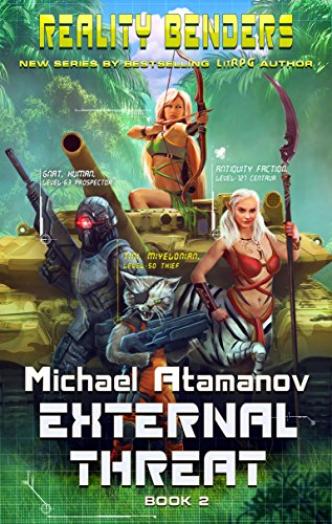 The countdown timer continues to tick, but Earth is still not ready to repel an invasion from space. Gnat is on his voyage with the Shiamiru, all the while trying to find backup for humanity among the great spacefaring races. After all, based on what he’s already seen, he knows not to count on the good sense of his own kind. Even facing an external threat, the people of our Earth cannot see past their internal squabbles and come together to fight as one. Gnat does not expect gratitude from his leaders for taking such matters into his own hands, but when have laws and rules ever stopped our intrepid hero before?!

A continuation of the slice of life sci-fi LitRPG. This time a heavy portion of the story takes place in the far reaches of space as our intrepid hero is taken on as a prospector for an alien mining crew. Gnat, the main character (MC), gets into fights, levels up his skills, and even develops some of the hidden talents hinted at in book 1. New alien cultures and characters are introduced and it was interesting to see how the MC used his brain to navigate the delicate waters of alien social structure and customs. The story takes several unexpected turns and I really liked how it developed. It didn’t go the direction I thought it would, but it was always fun. If you enjoyed book 1, you’ll like book 2.

The LitRPG elements for this book aren't heavy-handed. There aren't pages and pages of charts and gear description with very little story filler in between. This series has a real plot. One well done. The ending seemed a bit rushed, I think the author could have spent a bit more time showing what happened with the Centaurs and Germans instead of a quick explanation, but other than that the book was just about perfect. I'm not sure who translates these books from the native Russian, but whoever does it, has the nuances of the English language down perfectly.

This translation is quite good. No. Real grammar errors and the wording doesn't sound like google translate. The story itself is sci-fi and is probably the top of any sci-fi little out right now. Highly recommend this book.

Just my humble opinion but i find his writing to be a lot more refined and really makes the author's stories more engaging. This really is a fun sci fi/litrpg series and I enjoy seeing where Gnat's adventures will take him. Ehh I don't want to spoil anything but if you are a fan of Mr. Atamanov then you won't be disappointed!

I loved the first book, but I've gone beyond love with this second one... I'm not Michael, I don't have the words for it. But dear God's, I want more!