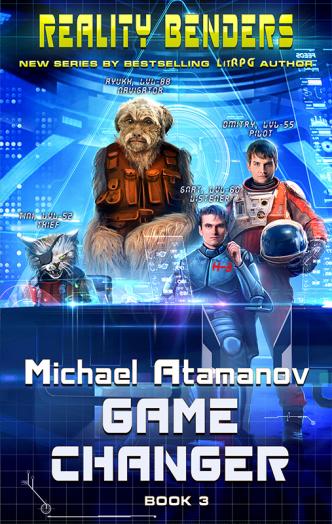 A war has broken out in the Galaxy! The great spacefaring races are all entangled in the fight and, even at the very edge of the known Universe, humanity can hear the echoes of its distant bloody battles. Our suzerains and defenders the Geckho are also caught up in this all-encompassing conflict. Is that a good thing for humanity or not? The answer is up for debate. On the one hand, the Geckho will no longer take the trouble to defend a planet inhabited by people, which is worrying. But on the other, might humanity have the chance to make a name for themselves and take a more active role in interstellar politics?

Gnat is with the Shiamiru crew on the front lines. He’s just changed class to Listener and his friends find themselves right in the thick of this grand interstellar war...

So many imaginative situations, both fantasy and sci-fi driven, clearly mark this series uniquely defined as far better planned and written than the now tired stuck in a full dive vrmmorpg that for me began with sword art online and swiftly led me to truly appreciate indie authors especially the initial works coming out of Russia.

This is one of the series that I always know that I’ll enjoy. It’s a slice of life sci-fi Litrpg. In book 3, in game - the story takes place entirely off earth. There are space battles, aliens, faction maneuvering, and advancement of the main character's new class. There’s lots of adventures, fighting, and some very interesting twists in the story. Good stuff all around.

What to say.. the story's great, a good pace that had me reading through the night, interesting dialogue issues that impressed me, fight scenes done to my (IMO) high standards, and just more of the Galaxy and game that feel original and just make me want way more.

I don’t read a lot of LitRPG, but this series is great and I cannot get enough. I was so excited to have my forgotten preorder show up today that I sat down and read it straight through. Now I am disappointed to have to wait for the next book! This series is enthralling! No spoilers, just get it. Interesting characters, situations, universe building and adventure.

Mr. Atamanov is a fantastic author! I truly enjoy all of his work and this book is no exception! I can’t wait to read more!