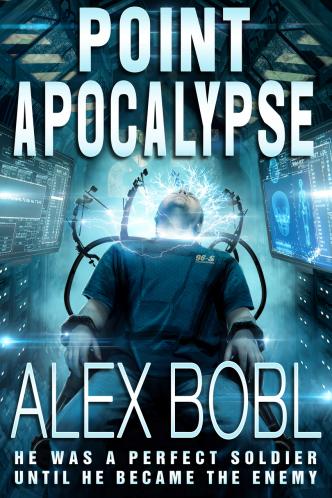 He enters a prison world. A place of no return harboring the death of the universe. No proper food or drinking water, no modern technologies. He doesn't know who he is. He can't tell friend from foe. He has no idea what brought him here. He has no time to think. He lives from one objective to the next.

The Earth's laws end here. No one to turn to for help. The lives of thousands of people now depend on him alone.

Set in the futuristic world of hi-tech sci fi, Point Apocalypse is an action thriller with a military edge. Rightless prisoners on a newly-discovered planet, ruthless raiders and the mysteries of an ancient alien civilization - Alex Bobl creates a picturesque world peopled with larger-than-life characters.

A prisoner in the post-apocalyptic world of New Pangea, Mark Posner believes himself to be a humble soldier jailed for assaulting an officer. As the book unfolds, he finally pieces his past together, remembering his identity. The truth will shatter him but will not stop him in his goal: preventing the looming extermination of his new home planet and its wayward but wholehearted inhabitants.

"If you like futuristic high-tech thrillers like I do, you’ll find this an excellent read - hard to put down, even harder to forget"