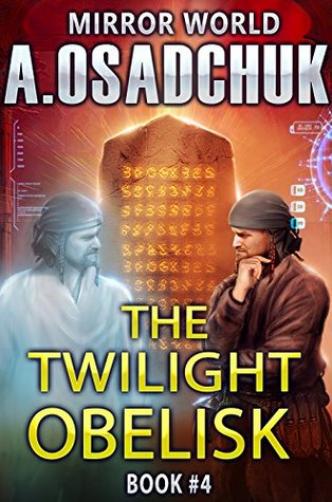 Olgerd and his tribal NPC gang have finally discovered the Forbidden City. Problem is, they haven't found what they were looking for. The ancient maps are hopelessly out of date and the Ennan capital city is lying in ruins.

In the meantime, their enemies are closing in. Noctean hordes are arriving from the Silver Mountain Valley; the Dark army has already crossed the Back Stream, and the forces of Light have already entered the Icy Woods.

The magic protection sphere which Olgerd received from the city's invisible guardians is about to expire... The only way he can save the lives of his trusty NPC friends is by activating the Twilight Obelisk.

Overall, this is a good read for anyone that’s enjoyed the other 3 books in the series though the end may not be what they were hoping for.

I've very much enjoyed the Mirror world series. Book 4 is as good as the others/ The Russian flavor of the story adds a lot for me. I like the way the author finished this/. This was a nice dream to wake from. Now I'd like to read the series from the beginning.

Great book and progression I can't wait until the next book in the series comes out . One of the best Litrpg series out to date.

I love the mirror world series and am very much hoping for more. I have had trouble putting any of them down, much to the detriment of my sleep schedule... If you love litRPG books, grab this series. It is definately one of the best I have found.

The series could be concluded with this book, but it appears we have a few more miles to travel with Olgerd. Hopefully future books will include real life events, as real life drove Olgerd into the virtual world.