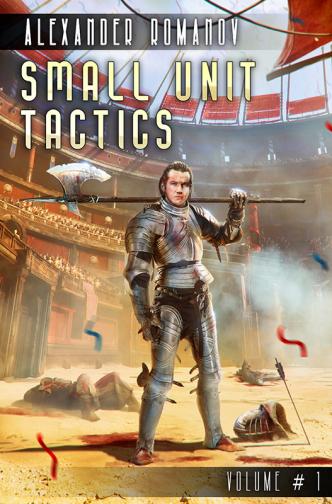 The two-part epic Small Unit Tactics has a massive fanbase in Russia, and these novels were in many ways forerunners to some of the most famous Russian LitRPG cycles. Departing from the genre standard, there are no system messages or stat sheets here. Instead, the author uses an artistic touch to illustrate the characters' growth as they level up and improve their skills, which undeniably sets these books apart. We are pleased to present them for the first time in English.

Tired of endless harems, 10,000 mentions of stats and perks, manual length diatribes about game mechanics and the same bland boring ass nerd character? Then this book is for you. This genre had swiftly overwhelmed but its own tropes and its isekai forebears tropes but this book manages to cleave to the heart of both subgenres keeping both fast pulpy action with the spirit of playing a game without the terrible bits of reading about someone else playing a game.

Really amazing book. Very Russian so expect a bit more grim take on the worlds, but very well crafted and balanced. Going to plow into the second one immediately.

On the story side, the beginning was a little annoying. It had a good enough action start but the main character (MC) is an unreliable narrator as he makes statements that haven’t been shown to be true to the reader. Like that the world is a simulation or game, the ‘Watchers’ are NPCs, and that violence outside of the arena is physically impossible. Additionally, beyond the arena fights, it's not particularly clear what’s happening. I mean the MC says everyone brought to the place is a hard core gamer but he’s only spoken to a few people. There’s also no scene showing how everyone got there, wherever there is, as the story starts with the MC in a park talking to a guy he thinks is on drugs, then entering the stands of the area to watch a fight. 7.2.

I enjoyed reading this book very much and would recommend it highly to anyone that like gamer type of books.

I received a review copy of this book.This book starts rather abruptly. It's almost like the book had the first 3 chapters chopped off, and the book begins at the point wen everyone's backstories has already been explained, and everyone is in the assembly hall waiting for the main event. It makes for some rather awkward reading at first. However, once the book gets a bit farther along, it actually turns out to be quite the interesting read. One point of interest which (for me) didn't affect the story at all was the author's decision of instead of having footnotes, and a place at the end of the book where you could read all of them, game terms were explained where they occurred with some symbols to offset them from the text. To me, this makes perfect sense, because nobody wants to stop reading a good story to go look up a term. I'd not seen this kind of layout before, and I actually found this to work much better for the most part. Some authors try to work the definition into the story, and that makes for odd turns of phrase sometimes, this method clearly separates the definitions from the story, but still doesn't wrench the reader away from the story to offer a definition. I don't know about others, but I liked this method. It should be very interesting to read the next book in the series, since this one performed an epic setup for a battle royale, and I for one most definitely look forward to that.
There's a few items in the story that may throw some, such as the constant references to game mechanics, even when the world as a whole doesn't really mention them, it's a bit jarring at times. Otherwise, I believe most LitRPG fans will enjoy this offering.