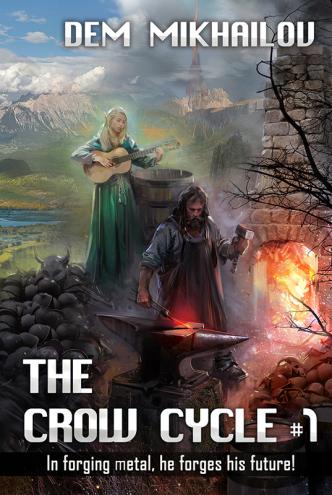 There’s a little tie in to the events in the main series, Clan Dominance, but nothing that spoils the story if you haven’t read that series.Overall, it’s a good slice of life story with a frontier, start from the ground up, kind of vibe. An easy entry in to the story universe that can easily be read on its own. Score: 7.5 out of 10

What a story! What terrific writing! Underneath the daily grind of Crow raising his stats is a mystery...who are the angels? Why must he sleep? Who was he before? But all of this is an undercurrent to a genuinely well-crafted yarn full of adventure and building. How am I supposed to wait until next May???!!! Well done.

A great read about a simple character, or is he so simple. I don’t want to give the game away, and in fact I really can’t as the broader story is still unfolding. I am left with many questions about the main character. It is set in an online game where players log in and out but not the MC, who is a player but seems to be set apart. There is no real life component in this story but the MC has too much knowledge to be a noob. So many unanswered questions. It is not a massive mystery but it just adds to my enjoying the unfolding. Give this one a go.

Crow is a reborn player, starting again from nothing - and it appears he is in a long term capsule, with a special developer agreement. Lots of fun building himself up and getting reputation with local npc’s. Good book, but this seems to be laying the foundation for a longer series that runs parallel time wise with the “World of Waldyra” series

Great LitRPG. Great story telling and a refreshing change from the sleepless ones story. Great read and hints if a mystery…