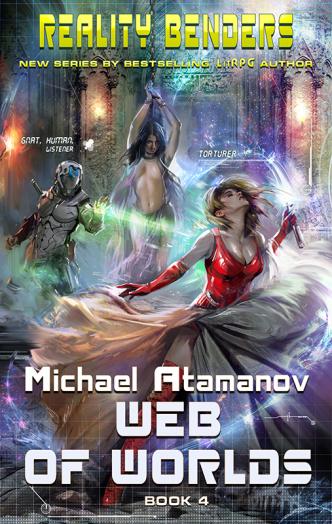 Ceasefires have one big downside: they eventually come to an end. And when they do, once again game nodes are set ablaze, and platoons of Dark Faction soldiers threaten our customary world with destruction. The enemy has grown stronger and more numerous. To make matters worse, they also got their hands on even deadlier weaponry. They have learned painful lessons from previous encounters and adjusted their tactics accordingly. What's more, the vast hordes of enemies are led by the greatest strategist of modern times, and his mage advisors can see all possible futures so they always know just what to do.

How can our world possibly stand up against such an enemy? Our only hope is the bravery and tenacity of our best fighters, those who’d rather die than surrender. Well, that and a starship captained by one lone mage.

Also available for purchase at Google, iTunes and Kobo stores

Book 5: A Jump into the Unknown is released!

All gamers know that as you level up it gets harder to reach the next level when you're at a higher lvl. The quests/tasks required are increasingly complex and harder to complete by yourself.. This follow up story is great, coz it's about time that Gnat increases his party size to actually complete those tasks (for loot and xp!). Its also good to see loose ends/side stories reveal itself and sync up with the main story. Side stories are always a favorite of mine in games and I really appreciate them in this series.

Seriously, my biggest annoyance was the fact that I had to do other things and couldn’t just dedicate my time to reading the book.

Too short, I wish there was so much more. As always a perfect mix of dialogue, action, and humour in a very fast paced book that leaves you wanting so much more.

I love these books more and more with each release!
Was excited with the in/out game conflicts all linking back to the previous book. Was well thought out and I enjoyed this very much.

Another good book in the series. It has all the good space faring, action adventure you’ve come to enjoy from the last couple books. Plus the plot moves forward on the war with the Dark Faction and has some interesting twists. Read the story in one sitting and enjoyed it all. Score: 7.6 out of 10