Clan Dominance: The Sleepless Ones-5 - audiobook is released 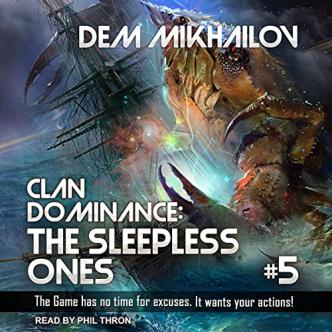 Clan Dominance: The Sleepless Ones, book 5 by Dem Mikhailov - audiobook is released

Rosgard has become the owner of a unique spell that can blaze a trail to the lost continent, thus leaving himself with no choice in the matter. His character will have to become a great deal stronger before the Great Expedition begins, or he'll have to forfeit the spell and pass it on to somebody else. However, the game's presented Rosgard and his team with a new challenge - now they have to accept the ultimatum of an aggressive underwater race known as the crabbers and set off on a difficult and dangerous quest which they dare not fail for fear of horrible repercussions.

At the same time, the identity of the Great Navigator is becoming less of a secret as more people learn that the player in question is really Rosgard. Things get dangerous, and our hero has to lay low in the real world as well as the game - there are millions of dollars involved, after all. Ros could really do with his father's help right now.

The Sleepless Ones is another factor that needs to be accounted for, since they want Rosgard to stand beneath their banners. Yet the Navigator wishes no conflict with the game's top clan, even though he values his own freedom above everything. Should he keep on playing his own game - or join the strongest clan? It's a tough choice, and the time before the Great Expedition keeps on ticking away.