Clan Dominance: The Sleepless Ones-7 is in pre-order 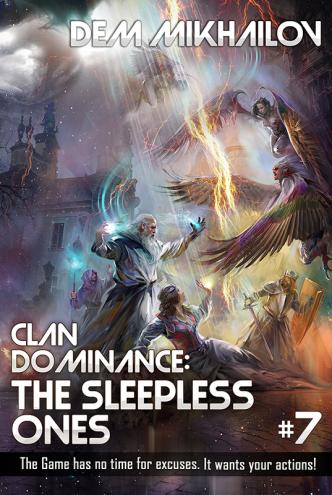 Clan Dominance, book 7 by Dem Mikhailov will be released July 2, 2021

It’s time for the Great Navigator Rosgard to be on his way, leading his seafaring armadas toward the far-off new continent. All Waldyra’s players are impatient to get there, desperate to hear the cry of “All aboard!”

But instead, Rosgard becomes a father, of all things. Although his mischievous little daughter is only a digital creation of this virtual world, the challenges of being a father are still the same. Besides, she isn’t a child anymore but a restless teen with a rather contrary nature. She loves fishing and other adventures, and she has no intention of staying in an induced sleep for much longer while her father is off gallivanting around on his own. She wants to have fun too!

That’s all well and good but the girl is a potential goddess in the making, and her arrival into this world isn’t exactly welcome by the gods of old whose own heavenly thrones are getting a bit too shaky for comfort. New gods like herself offer generous gifts to their would-be followers, stripping the old gods of their dwindling flocks and with them, the divine energy that sustains them. With a considerable drop in power, the old gods risk being thrown down into the terrible divine hell of Tantarial. No one wants to go to hell, and gods are no exception. The wicked goddess Guorra embarks on a veritable headhunt looking for the girl who’s now in mortal danger.

So Rosgard has no choice, really. He’s obliged to take his little girl with him on his perilous journey. And now he’s busy leveling up while preparing for his great voyage which promises new puzzles and mysteries in his discovery of Waldyra.

Read the English version of the next book of the cult Clan Dominance LitRPG series!