The Dark Herbalist is on KU now 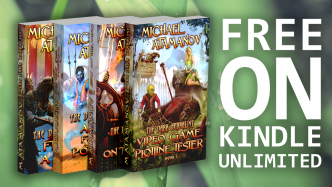 The Dark Herbalist by Michael Atamanov

4 books are now on Kindle Unlimited -

The Dark Herbalist is a cyberpunk LitRPG series currently comprising four novels, all of them Amazon bestsellers.
In a typical megalopolis of the near future, lush skyscrapers of the business center give way to drab apartment blocks housing the poorest of the poor: third-world refugees, street gangs and criminal overlords. That’s where the story’s protagonists live: Timothy and his handicapped sister Valeria who’d lost her legs in a car accident many years ago.
Timothy finds a job as a video game plotline tester for Boundless Realm, a giant corporation producing the wildly popular MMORPG game of the same name. The character assigned to him is a goblin herbalist, of all things; his task - to find something that would make this combination interesting for potential future players. There’re no guides or manuals to assist him in his work which plunges him into wild untrodden locations far from civilization. His sister Valeria offers her help, creating her own character in order to help her brother.
As the two log into the game, they start acting on a hunch, often unwisely, absurdly even. But their abilities to think out of the box allows them to achieve considerable heights - so much so that they attract the attention of both the corporation’s bosses and the criminal gangs of their neighborhood. They make new faithful friends (among players as well as some quirky NPCs) and acquire countless followers of their video feeds. They now have lots of fans - and some very powerful enemies.
As Timothy realizes he can’t stop halfway on this road to success, he plunges himself into more reckless adventures, each one more dangerous than the one before it, trying to attract the audience’s attention to his Goblin Herbalist character and make him stand out from the hundreds of millions of other players. The corporation’s bosses keep a close eye on his progress. The problem is, such an interest from the powers that be comes with strings attached. Their outward friendliness and respect might result in a totally different set of problems. Deadly problems.