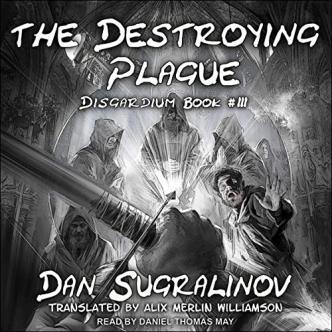 Disgradium-3: The Destroying Plague by Dan Sugralinov - audiobook is released!

Having emerged from the sandbox into the wide world of Disgardium, Scyth and his friends find themselves under the watchful eye of the preventers. The strongest clans in the world hunt not only Scyth, but also the already discovered "threat" Crag, a member of the Awoken clan.

But this is just one of many problems; the Sleeping God has another impossible quest for them. The old enemy Big Po thirsts for vengeance, and the Nucleus of the Destroying Plague prepares to take cruel revenge against the former Herald....

btw, check out our recent interview with the author. Book 4: Resistance will be released tomorrow!