Disgardium series is now on KU 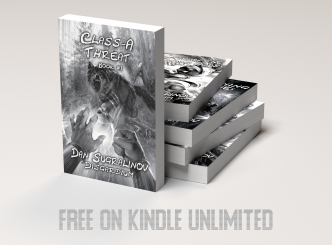 Disgardium series by Dan Sugralinov is added to Kindle Unlimited

Earth, 2074. After World War III, a single world government rules the planet — the UN.
The planet’s population now exceeds twenty billion, at least a third of which are non-citizens, people declared useless to the community, which means they have no rights to the benefits of civilization. Citizenship is divided into categories; from A with the highest status, the social elite, to L — the lowest.
At the recommendation of the UN Department of Education, every teenager between ages fourteen and sixteen must spend at least one hour per day in Disgardium. This is considered an essential part of a well-rounded education to give teenagers the social skills they need and prepare them for adult life.
The student Alex Sheppard takes the in-game nickname Scyth. After making his character wrong and having trouble leveling up, he quickly loses interest in the game. For over a year, he just spends his mandatory hours in the sandbox, sitting on a bench outside the tavern.
His parents are planning to divorce, which will lower their citizenship class and income, and they won’t be able to pay for Alex’s education to fulfill his dream of becoming a space guide. The colonization of Mars has begun, and plans are in the works to correct Venus’ orbit.
Half a year before school ends, Alex is forced to start playing Disgardium for real to earn enough for his studies.
To maintain balance, the game’s developer company Snowstorm initially introduced the policy of ‘Threats’ to knock out imbalanced players. Any player-threat identified by an artifact of the True Flame can be thrown out of the game permanently with the help of a simple ritual. The eliminator receives rewards based on the Threat’s potential, and the Threat is also rewarded: the higher its level, the greater the compensation, but the harder it is to defeat. If the Threat’s status reaches extreme highs, it can be tough to eliminate. This means that the eliminators (or ‘preventers,’ as they call themselves) gain more by eliminating Threats before they power up.
The Threats themselves need to hide and level up. Their reward after elimination comes not from their potential, but from their current status level, where A is the highest and Z is the lowest.
Scyth becomes a Threat with potential A after a series of unlikely events converge.

Start your adventure with Scythe