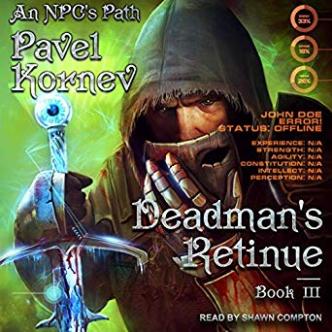 To spend the last hours of 2019 we present you our last audio release in 2019 - An NPC's Path: Deadman's Retinue by Pavel Kornev

Getting stuck in virtual reality isn't fun, but being trapped in an NPC's dead body is really the pits. Still, there might be a way out-provided John can find the Scroll of Rebirth. The problem is, finding it is only half the hassle; knowing how to use it is another bag of worms entirely. Several months of full VR immersion may have turned the cumbersome walking deadman into a swift killing machine, allowing him to earn the patronage of the Lord of Chaos and even acquire his own crypt - but John is still a long way away from reaching the coveted level 100 which would allow him to escape his virtual prison and rescue his own physical body.

John has run out of time; he can't afford to play by somebody else's rules anymore. Which means it's time to set his own. Would you really call his plan crazy? Earning all the remaining XP in one fell swoop by killing the terrible Lord of Decay? A crazy escapade indeed, but who better suited for it than our very own Dead Rogue?