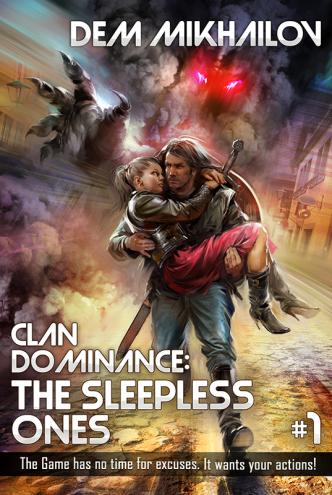 We're happy to present you our interview with Dem Mikhailov, one of the founding fathers of Russian LitRPG whose Clan Dominance series is about to be published on Amazon (previously published as Way of the Clan)!

You were one of the genre’s founding fathers in Russia. Could you please tell us how it happened?

Well, I’m actually a veteran gamer. I started playing back in the 1980s, and as long as I remember myself, I always wanted to be able to travel to a game I particularly liked, to talk to my favorite characters and personally fight the villains. Over the years, this dream didn’t go away until it finally came true in my Valdira books. There, my characters don’t just play: they truly live their lives in that state-of-the-art full-immersion MMO game.

There’s a lot of discussion in the English-speaking world regarding the accuracy of the very term “LitRPG”. As one of the people who actually coined the word, do you think you could offer an alternative?

I don’t think it’s very accurate, either. By saying “RPG”, we presume that the reader takes an active part in the MC’s adventures instead of just reading about them being unable to influence the book’s events. At the time, I was trying to choose among several other options but didn’t manage to come up with anything better than this admittedly catchy soundbite.

How much has the genre changed over the years? Are there any fundamental changes to its tropes, such as new trends, etc.?

Honestly, I haven’t noticed anything substantially different. You’d be hard pressed to do so without shifting the very boundaries that make the genre what it is. It’s all about the characters’ adventures in the virtual world of a computer game, so the only thing that can change is the setting, really. You can replace dragons with starships and the green pastures of a fantasy world with the radioactive wastes of a post apoc story, but the premise remains the same: the story has to be set in an online computer game.

You’ve written lots of books set in Valdira. Could you give us a quick guided tour, maybe, just for the reader’s convenience? Which ones of the series should we start with? And which ones are the follow-ups?

The world of Valdira is huge really, to the point where I have several series which unfold within the same timeframe, occasionally overlapping. I tried to make all of my MCs unique, each with their very special character and philosophy, placing them in particular spots all over the enormous game world. So yes, you should really have a map. It’s probably best to begin with Rosgard’s story told in the first two books of Clan Dominance: The Sleepless Ones. After that, you can tackle the first books of all the other series and continue from there, following all the local plot lines as well as the global story at your own pace.

Are you still working on it? Do you have some sort of master plan regarding the ultimate number of books and series set in Valdira? Or are you just following your nose?

Yes, I do keep working and yes, I do have a master plan of the main story which involves all the main characters, each of whom will play their part and affect the events. This global story gradually unfolds in all of the books of every series, ultimately falling into a coherent picture like a jigsaw puzzle. At the moment, I’m still far from completing it. I still have lots of Valdira books to write.

A LitRPG author is often also a consummate gamer. Do you play computer games - and if you do, which ones? Do you think a LitRPG author needs to have first-hand experience playing online games?

I’m a compulsive gamer, period. I try to spend at least half an hour every day playing. Personally, I prefer turn-based tactics games with no time limit, so that I can enjoy the ride. I also like an occasional shooter.

And talking about first-hand experience... It’s all about the author’s imagination, really. In my opinion, a LitRPG author should be comfortable with MMORPG basics, such as assigning levels and knowing how a character’s characteristics work, and that’s about the extent of it. You really should focus on your own imagination rather than game technicalities: the more engaging and picturesque your game world, the more chance of your readers losing themselves in it.

Could you tell us how Valdira started?

It all began with Rosgard. The first book’s plot just came to me within a few hours. So I just sat down and started writing about this ordinary guy called Rosgard who was forced to delete his favorite char and start all over again, re-entering the Crèche: a noob location situated at the outskirts of the great city of Algora.

What’s your vision of the future of LitRPG? Do you think it’ll manage to survive as an independent genre or that eventually it’ll just merge with science fiction?

I have no doubt that the genre will preserve its uniqueness and popularity. It’ll always have its own niche because, let’s face it, there isn’t that much of science fiction in it. In most LitRPG novels, the existence of a powerful full-immersion online game is often the only speculative element. The characters’ trials and tribulations unfold within the game itself, without affecting the real world in the slightest.

Clan Dominance: The Sleepless Ones will be released March 5, 2020