Mirror World-5: The Founder is available for pre-order 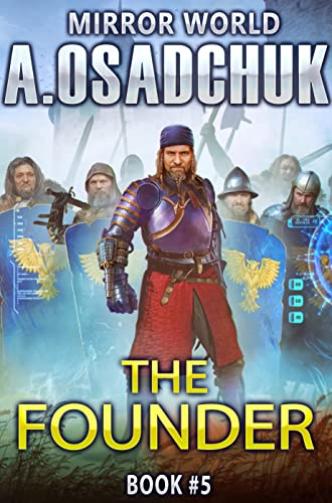 Mirror World, book 5: The Founder by Alexey Osadchuk will be released November 8, 2022

For Olgerd, the month in recovery which followed his month-long full immersion stint in Mirror World may have felt like a single day. But while he relaxed in the bosom of his loving family, in-game events progressed in leaps and bounds.

The clans of both Light and Dark continue their lightning expansion into No-Man’s Lands. Reports of violent clashes between clan scouts - both with other contestants and local top-level monsters - fill the pages of game and multimedia news feeds as everyone is trying to win the juiciest morsels of these new territories for themselves.

Olgerd knows that the Dark players still have a grudge against him - and that their rickety truce with the players of Light might be broken at any moment. Then the valleys of the Silver Mountains will fall prey to new invaders.

Olgerd needs to help the Calteans mount defenses for their new settlement. Which means it’s time for him to get back into the game.