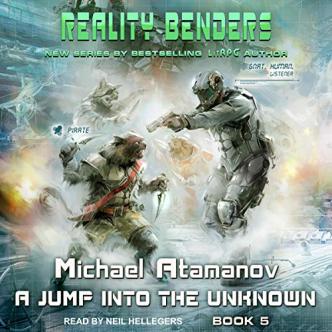 Reality Benders-5: A Junp into the Unknown by Michael Atamanov - audiobook is released!

We put an end to the war with the Dark Faction, but still humanity's problems are far from over. More than half of the game's promised tong of safety has elapsed, and yet humankind is no closer to forming a unified front. We've just begun building one of the 12 planetary shield generators necessary to give Earth complete protection, but we don't have enough construction materials, players, or time. Should we ask the parallel magocratic world for help? After all, an invasion from outer space would hurt them just as bad. The mages, though, have plenty of problems of their own.

What options does Gnat even have here? All he can truly count on are his own strength and his personal Relict faction. Should we put all our eggs in one basket and look for help in deep space? Might technology from ancient, long-vanished races allow humanity to grow strong enough to turn back the onslaught before it's too late?