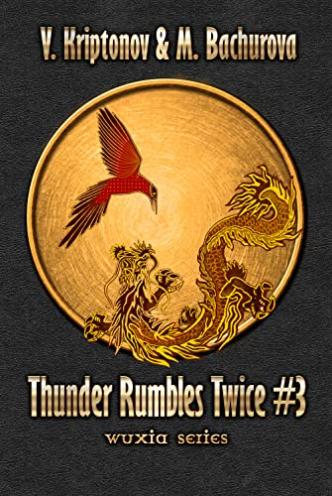 Thunder Rumbles Twice book 3 by V. Kriptonov and M. Bachurova is going to be released December 14, 2022

The tournament of clans didn’t end the way Lei Cheng wanted it to. His fate has taken another surprising turn: Lei is no longer a slave of clan Zhou. That said, he isn’t exactly a free man either. Lei now serves as the bodyguard to the young clan leader Yun. And although the work takes up much of his energy, it also gives him the chance to continue his own investigation. Lei seeks his old enemy Kiang. Nobody has ever seen the man’s face, only heard the unbelievable rumors that surround him. Just one thing is certain: Kiang is furnishing the clans of the Celestial Empire with a new drug. Try it once and you’re hooked. In the new world, Lei’s enemy continues to march toward his goal. And Lei continues the fight, with no plans of stopping.

But as soon as he finds a thread leading to Kiang, it is immediately cut. The enemy has dispatched a new foe to the fight – an incredibly agile ninja who hides his face and tries time and again to kill Lei. The bodyguard of clan Zhou’s leader becomes a permanent source of danger for the very man he is protecting. As if that weren’t enough, the the young leader himself keeps putting his own head in the noose while trying to assert his authority before the other clans.

Is Yun a friend, or a future ally? The leader of a mighty clan, or just a boy who lost his father and found himself in a tough spot? Whatever the case, right now Lei is on his side. And to finally solve the matter of redistributing spheres of influence, Yun and Lei have set off for a summit. The heads of all four clans of the Celestial Empire will be gathered there. The fate of this world – and of Lei Cheng himself – will be decided there. All the clans’ forces march toward an ancient monastery high up in the mountains to fight a decisive battle…