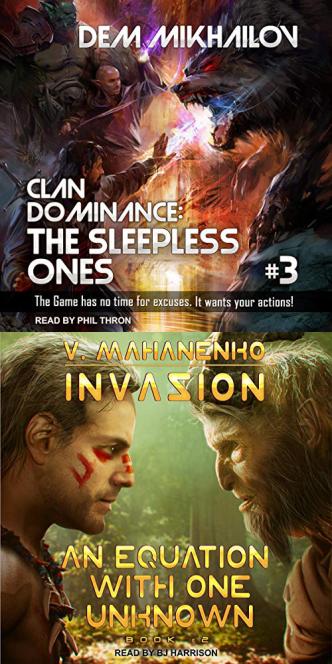 Clan Dominance: The Sleepless Ones-3 by Dem Mikhailov

Nothing is ever given freely. One has to pay the full price for everything one gets. Easy money for a seemingly minor quest in a game? Well, you're obviously being played for a mark. Suddenly stumbled upon a unique spell coveted by the entire world of Waldyra? That automatically makes you the quarry for the game's top clans, each of which will be hunting you - IRL as well as inside the game. Or have you, perhaps, chanced upon a gift from a legendary set? Expect trouble for certain, for there's a horrendous creature hunting you now, intending to take your life eventually - it's but a question of time.

And yet, despair not! Deal with things resolutely instead of going with the flow. You've got to act; you've got to play your own game. That's the only way of becoming a legend of Waldyra. You cannot run from your problems forever - at some point, you'll still have to face them, so face them on your own terms. Talking to someone who betrayed you in the past (as you may have been thinking) would probably be a good start. Or, perhaps, addressing the menace and turning the tables. Who said the quarry couldn't become the hunter once again?

Invasion: An Equation with One Unknown by Vasily Mahanenko

More Barliona adventures from the best-selling author of the Way of the Shaman LitRPG series!

To make a clan does not necessarily mean to make it successful. First you have to walk the hard path from the foundations of your castle to victory in interclan conflicts. Only then will you be recognized. Only then can you be listed among the location's top clans.

Your adversaries, however, will not be sitting around twiddling their thumbs. No dominant clan needs yet another wannabe competitor. Or its two founders. Which is why Kvalen and Eradani are being hunted down. Bugles sound as players sharpen swords and draw arrows. Bring on the show!

Just one thing - have the contestants accounted for all the factors involved in such a dubious undertaking? For in this equation not all the variables are known.