Two new audiobooks: The Bear Clan-4 and In the System-4 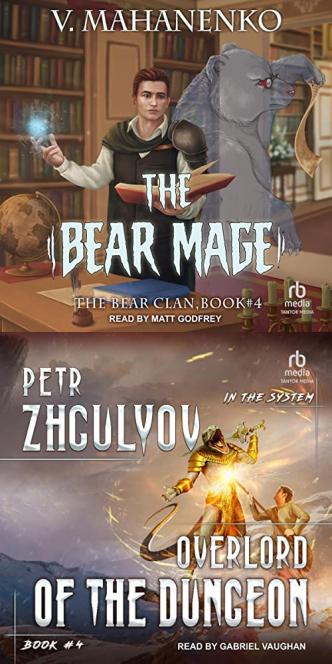 The Bear Clan, book 4: The Bear Mage by Vasily Mahanenko

What does it feel like to have the whole world know they owe you their salvation? Is it pride? Basking in self-admiration? A realization of your own greatness against the backdrop of anonymity shared by everyone else? There are lots of possibilities, only none of them describe what actually happened.

Instead of becoming the savior, Leg Ondo was made a mockery. The being governing the planet forbade his totems and chosen people to disclose information about the battle between the demons and dragons. And that left the world confused. What did the Brown Bear Clan do to deserve the avalanche of goodies that came pouring down on it? Should they be knocked off the pedestal they so recently climbed atop?

But even that would be manageable if it weren't for one thing: the multilevel competition designed to bring the three empires closer together. How did Leg Ondo possibly get himself involved this time?

In the System-4: Overlord of the Dungeon by Petr Zhgulyov

Ivan Susanin heads to the submerged Toyo as part of an expedition to find the missing raven, help evacuate the civilians and slay as many monsters as possible. And that's only on the surface. He has successfully learned to combine the public good, national interests and his personal goals a long time ago.

But life is full of surprises. A discovered card gives Ivan the right to become Overlord of the Dungeon, an isolated location somewhere on another world. However, he's far from the only contender, and the goblins who inhabit these tunnels have their own plans. Strength alone won't be enough to claim victory this time.