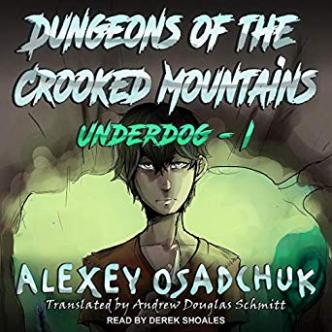 Underdog 1: Dungeons of the Crooked Mountains by Alexey Osadchuk audiobook is released!

Eric was born in a world governed by the Great System, in the family of Aren Bergman, a respected miner from Orchus. But the joy of gaining a son was overshadowed by the newborn's terrible affliction. Eric was completely nulled-level zero and no characteristics points. The only things keeping him from dying were his tiny base supplies of "life" and "energy".

The medicine woman who delivered Eric believes this to be the work of the evil spirit, Bug. Due to the peculiar laws of the Great System, Eric cannot use experience essences or characteristics tablets, so he risks having to spend his whole life confined to a bed. But his father finds a solution. He takes out a large bank loan and goes to the capital where he buys a few artifacts of the Ancients on the black market, which have no level restriction.

Despite having the artifacts, Eric is still very feeble, and everyone in town thinks him a freak. But at least he can move on his own, and that gives the Bergmans hope. But alas, it isn't for long. On Eric's 14th birthday, his father and mother die in a mining accident. The bank takes their house, and Eric is left with no choice but to work off the remaining debt in the Dungeons of the Crooked Mountains. And so begins the story of a nulled boy's struggle to survive....