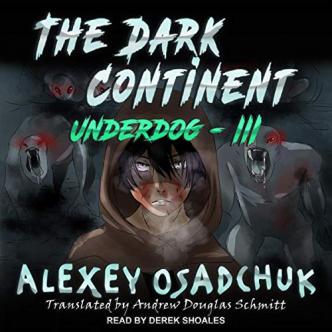 Underdog-3: The Dark Continent by Alexey Osadchuk - audiobook is released!

Eric Bergman used to be treated like an outcast, cripple, and freak. Some pitied him, others squirmed in his presence, while others still mocked him to his face. He himself even thought he was born cursed by the gods. But bit by bit, all that changed. That which was once considered a flaw or defect transformed into an advantage. And Eric slowly learned to use it to his benefit.

Eric and his friends escape Master Chi's Hive and journey over the orcish steppe and through the Stone Forest, which tempers them and makes them a lot stronger.

During his travels, Eric discovers that his elder brother never went to the Wastes and that his parents were lied to about what happened to him. Eric promises himself to uncover the truth about his long-lost brother.

Moving through the borderlands toward his home city no more than a few days ahead of the orcish horde, Eric still has yet to guess that his adventure is just getting started.